Over 10,000 Attend Falun Dafa Conference to Hear Stories of Self-Improvement 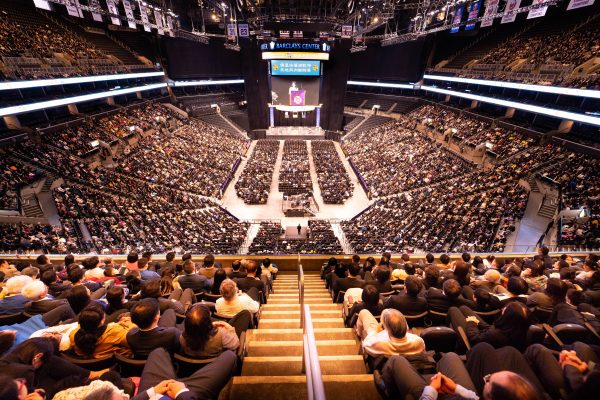 As speakers stepped up to the podium and shared their journeys of self-improvement, many in the audience quietly wiped away tears.

Many felt inspired to become better versions of themselves.

“It’s so moving to see someone who is prepared to be so vulnerable,” said Mark Hutchison, an entrepreneur from Perth, Australia.

Hutchison and more than 10,000 other practitioners of the spiritual discipline Falun Dafa convened at the Barclays Center in Brooklyn on May 17 for a daylong conference.

Attendees came from all over the world, as evidenced by the variety of languages available for simultaneous translation of the speeches, including Chinese, Spanish, German, Korean, Japanese, and Italian.

Falun Dafa, also known as Falun Gong, is a traditional Chinese self-improvement discipline whose practitioners live according to the moral principles of truthfulness, compassion, and tolerance. They also do five sets of meditative exercises.

In China, spiritual practices were often passed down from master to student, across the generations. Falun Dafa, an ancient practice, was introduced by Mr. Li Hongzhi to the public in May 1992 in the northeastern Chinese city of Changchun. Since then, it has spread throughout China and to more than 80 countries.

The conference was also a celebration of the 27 years since Falun Dafa’s introduction.

Hutchison said that after learning Falun Dafa, he became a calmer person and gained a deeper understanding of how to find one’s purpose in life. “We fill our lives with so much busy-ness … but why are we human?” he said.

The then-paramount leader of the Chinese Communist Party (CCP), Jiang Zemin, feared that the practice’s traditional moral teachings would prove more attractive to the Chinese people than the Party’s atheistic ideology.

On July 20, 1999, Jiang launched a nationwide campaign to eradicate the practice. Adherents were rounded up and thrown into prisons, labor camps, brainwashing centers, and other facilities, where they were often tortured in an effort to force them to give up their faith.

The website Minghui.org, which serves as a clearinghouse for news about the persecution, has confirmed 4,304 deaths from torture and abuse. The real number is believed to be far higher, due to the difficulty of getting information out of China.

In addition, large numbers are believed to have been murdered through the pillaging of their organs. Since The Epoch Times broke the story of forced organ harvesting in China in 2006, independent researchers and journalists have investigated and confirmed allegations that the Chinese regime is extracting organs from living prisoners of conscience, mainly Falun Dafa practitioners, for use in the country’s organ transplant system. Researchers have called this a “cold genocide.” As an integral part the persecution, the CCP’s propaganda apparatus launched a campaign to vilify the practice and its adherents.

Many of the speakers on May 17 recounted their efforts in raising awareness about the persecution in China, and the difficulties they experienced while doing so.

One young woman currently living in Tokyo spoke about her experiences of talking to Chinese tourists about the persecution of Falun Dafa.

Many had believed the propaganda by the Chinese regime and held negative feelings toward Falun Dafa, sometimes yelling or cursing at her and other Falun Dafa volunteers who tried to speak with them.

But the young woman realized that she should be kind and patient toward them despite their hatred. After telling them about how the Chinese regime disseminated hateful propaganda about Falun Dafa, many tourists changed their attitudes.

Rob Gray from the United Kingdom talked about his efforts to appeal to government officials about the issue of forced organ harvesting from Falun Dafa practitioners in China.

Gray spoke about his efforts to raise awareness about this issue in both the UK Parliament and the European Union, and how he persevered in the difficult, tiring task of coordinating outreach efforts due to his belief that more people needed to hear about these atrocities, which are still occurring in China today.

The teacher of Falun Dafa, Mr. Li, came to speak at the conference. In Chinese, Mr. Li is often referred to as “shifu,” a term of respect for a great teacher. Upon his appearance on stage, Mr. Li was greeted by a standing ovation.

Mr. Li spoke for about two hours, discussing challenges Falun Gong practitioners face in their efforts to raise awareness about the persecution. After his address, which was delivered without the use of notes, he answered questions from the audience.

For William Wang, 42, this was his first time attending a major Falun Dafa conference since immigrating from Beijing to the United States in 2018.

Hearing Mr. Li speak in person stirred deep feelings of gratitude and wonder in Wang. “In the first 15 minutes, I didn’t even realize that it’s real that I can listen to Shifu in person,” Wang said.

Wang said he was also very excited to meet with so many Falun Dafa practitioners and listen to their speeches.

Nicole Hao contributed to this report.