After severe torture, entrepreneur risks everything to smuggle evidence of persecution out of China 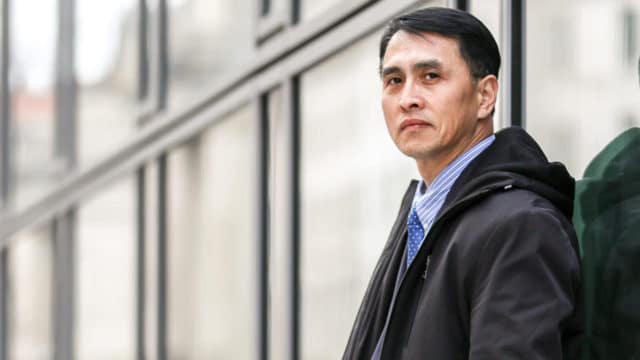 IN THE BUSINESS OF TRUTH Mr. Yu Ming in Washington on Feb. 19, 2019. He arrived in the United States to join his wife and daughter in January 2019 through the help of the U.S. government, after being imprisoned for 12 years and tortured nearly to death in labor camps in China for his belief in Falun Gong.

The 35-year-old entrepreneur and Falun Gong practitioner had been repeatedly shocked by high-voltage electric batons and locked for three months inside a small iron cage in which he could neither stand nor sit, among a range of other abuses.

Mr. Yu had a strong urge to expose the torture that was part of China’s preparations for the Olympic Games. He saw from his hospital bed that more and more people were arriving at Masanjia, having been sentenced for “planning to commit robbery” or “preparing to steal.”

Inside the camp, the torture and terror were accelerating to “transform” Falun Gong adherents.

Mr. Yu couldn’t bear to see more innocent people tortured so terribly. Plus, he believed that the outside world should know what was happening after Beijing was granted the right to host the Olympics. Instead of improving its human rights as expected by the international community, the regime was persecuting and even killing people because of the Games.

Hoping the brutal situation in the camp could gain attention and bring about change, he hatched an elaborate plan to help two fellow Falun Gong adherents escape and try to get in touch with foreign journalists who were in Beijing to cover the Olympics.

All went well, and the two men escaped, but they were captured three days later. The escape attempt—from a “model” labor camp and during the Olympics, when all eyes were on China—infuriated the highest leaders of the communist regime. Mr. Yu and the two escapees were tortured to the point of death and had a year added to their sentences.

Mr. Yu was released in 2017, and at the end of 2018, he escaped to Thailand, where he was able to obtain a visa to the United States. On Jan. 27, after nearly 12 years in labor camps and jails, he joined his wife and children in San Francisco.

And he didn’t come empty-handed.

Before making his daring escape to Thailand, Mr. Yu gathered a collection of evidence—ranging from official documents to secret videos recorded on a hidden camera— that give first hand accounts of the ongoing persecution in China.

Had he been caught with this evidence, Mr. Yu would surely be back in prison and would likely never see his family again. But he made it and is now doing all he can to help expose the abuses he suffered and witnessed.