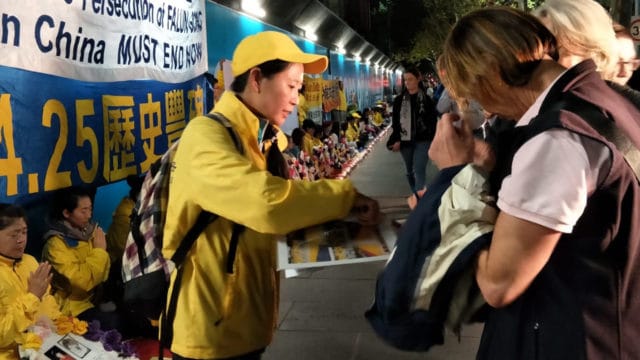 During a peaceful protest in Australia, Angel tells passers-by about the persecution of Falun Gong in China.

What is Falun Gong?

Falun Gong, also referred to as Falun Dafa, is a mind-body practice that became incredibly popular in China during the 1990s. Together with five sets of gentle meditative exercises, the practice also has teachings of the Buddha School, mostly based around morality, the human body, and the universe.

“Falun Gong’s incredible healing efficacy enabled many people to have stronger, healthier bodies,” Angel told me. “So, people naturally wanted to tell others about it. In just a few years hundreds of millions of people were practicing.”

It was in 1998 when Angel first found Falun Gong. She, like many others, started practicing in hopes of getting healthier.

“Before I found this practice, I did not know how to deal with the difficulties and frustrations in life. This led to depression. I couldn’t control my emotions, and felt lost in life.”

“Being so distressed all the time caused my heart rate to became irregular. Sometimes when climbing two flights of stairs, my heart would palpitate like crazy, my body would feel weak, and I would be sweating.”

“I couldn’t control my temper, and would lose my cool over little things. Moreover, my liver developed a problem, it became very painful.”

“But, the psychological pain far outweighed my physical pains. At the time I was 28, and I thought I wouldn’t live past 40 years old!”

Today, Angel is 49. Not only did her health improve dramatically, but her ailments literally disappeared. Also, “after practicing Falun Gong, I became a cheerful, optimistic, happy person,” she adds.

Precisely because the practice grew in such rapid popularity, former Party Chief Jiang Zemin deemed Falun Gong’s enormous growth a threat to the totalitarian regime, and began a brutal persecution in 1999, with the sole intent to eliminate Falun Gong.

It was a difficult reality to face for the approximately 70 to 100 million Falun Gong practitioners, not to mention all their families, when they suddenly learned that the CCP—the same regime that mass-murdered 10,000 innocents in the Tiananmen Square Massacre—had turned against them.

Anyone caught practicing would be arrested. People were encouraged to report on Falun Gong practitioners in neighborhoods and workplaces across China, and in some cases, were enticed with monetary rewards. Police would be given bonuses if they caught a practitioner.

From being able to freely practice such gentle, harmless exercises in parks, to all of a sudden being treated as State enemies for being meditators … there must have been a misunderstanding, you may think. Surely clarifying the situation to the Appeals Center in Zhongnanhai would help?

Maybe Angel did not realize, but anyone attempting to appeal for Falun Gong’s sake, however peaceful one may be in doing so, would be arrested too.

In 2000, Angel boarded a Beijing-bound train with four other practitioners. Their destination: Tiananmen Square.

“We went to appeal for our right to practice freely, in peace,” she says. “We’d only been sitting for 10 seconds or so when we were illegally abducted.”

“Police and plainclothes officers were everywhere on Tiananmen Square.”

Angel was taken to a police station, where she was interrogated. The police officer conducting the interrogation began burning her hands with a lighter to force her to divulge her identity. But she just endured the pain, and didn’t tell him anything.

One of the practitioners who accompanied Angel couldn’t endure the physical torture, and unwillingly divulged everyone’s details.

Angel was sent back to her city, where she was detained at her workplace for four days. She couldn’t go home. Guards were assigned to monitor her around the clock. Fortunately, she was finally released, though not free from further persecution.

But that wasn’t the last of her troubles. Police illegally abducted Angel from her workplace in 2001.

“I was sent to a ‘re-education’ class,” she says, referring to what’s more commonly known as a brainwashing center. “They attempted to force me to renounce my faith. But I’m not a piece of wood. I have my own thoughts.”

Angel stayed firm, and insisted on not relinquishing her faith, despite the tremendous psychological pressure she was under.

In these centers, guards force practitioners to watch Party propaganda all day, every day. The programs vilify Falun Gong, and glorify the Communist Party. The volume is turned up very high. Guards force practitioners to write down their thoughts periodically, to inspect their “progress.” They are punished if their thoughts don’t comply with the propaganda.

Angel didn’t cooperate, and went on a hunger strike to protest the persecution, but was subject to more abuse.

“Several people pressed me down,” she recalls, before touching on a deeply tormenting experience of being force fed with a rubber tube.

“When they pulled out the tube, it was covered in blood. I really don’t want to recall this…”

Tube feeding would normally be considered a life-saving medical treatment, but it has been used by the CCP to persecute Falun Gong practitioners who go on hunger strikes in detention centers, forced labor camps, and prisons. Moreover, there are often drugs in the liquids that cause the victim to become unconscious. Force-feeding has resulted in the deaths of countless Falun Gong practitioners.

“My family received a letter stating I was to be unconditionally released,” she says, adding that she was later picked up and taken back home.

Through practicing Falun Gong, Angel regained her health. But, so long as she was in China, she was not altogether free.

Angel was once again arrested and detained in 2004. Her crime? Distributing information about the persecution that Falun Gong practitioners are subject to in China.

Whilst the CCP madly persecutes adherents of the spiritual practice, the regime goes all out to keep the details a secret from China’s 1.3 billion.

It should be considered a noble act for someone of their own initiative to raise awareness of human rights abuses, but in China, speaking out against the regime can land one in prison, and has cost too many their lives.

For Angel, she was subject to even more, horrendous torture.

“Several people pinned me down to force feed me,” Angel recalls of her third time being detained.

“In order to get released earlier, prisoners collaborated with the police to torture us wildly.”

“They jumped on my chest with as much force as possible with their whole body weight pressing down.

“Some prisoners forcefully grabbed my head. Others pulled my hair as they force fed me.”

“They force fed me extremely salty things. I felt terribly thirsty. My tongue felt dry like sand. My stomach felt like it was burning. I don’t know what they poured in.”

There was one strange incident, however, which Angel experienced in detention.

“When I was incarcerated guards drew my blood.”

“I was confused at the time. Of the 20 people detained in that large room, why was only my blood drawn? Why didn’t they take blood from anyone else?”

Angel was the only Falun Gong practitioner in that room.

It certainly was not because the guards were concerned about her health, as Angel was being tortured and abused daily.

“It was finally in 2006 when the truth was revealed. The Chinese Communist Party is killing Falun Gong practitioners for their organs to sell. That’s when I finally realized that the CCP is engaged in such evil. Killing innocents on demand.”

After more than a month of being force fed and abused in the detention center, Angel was in bad shape. She couldn’t walk, nor could she take care of herself. She had to be carried everywhere. Despite her condition, she was sent to a forced labor camp to make products for export.

But Angel had been so badly tortured, she needed to be taken to the forced labor camp’s infirmary.

“Medical staff there checked my physical condition. A doctor said that as my endocrine was a mess, I could die at any moment, so it was useless to treat me. They refused to accept me.”

The police officers who had driven her to the forced labor camp couldn’t just leave her there, nor could they take her back to the detention center.

Once again, Angel’s family was notified to pick her up.

It was too much for Angel’s elderly mother when she laid eyes on her daughter in the patrol car, lying there motionless.

“I was persecuted to the point of being unrecognizable. My elderly mother cried, shouting my name. The policemen told my mother: ‘We’re handing her over to you. She’s still alive.’”

“Witnessing people’s kindness is the most beautiful thing”

Although Angel was eventually able to heal herself through her practice, it was not safe for her back home.

“Living under the Communist Red Terror in China, there’s no guarantee that I’ll be safe. Given the danger, and in desperation, I fled China and flew to Australia, this beautiful and free country.”

Fortunately for Angel, her passport was not cancelled nor confiscated by the CCP, and thus she was able to travel abroad in 2015.

Though everything is different for her now, being oceans apart from her family, and all the things she is familiar with, Angel has learned to adapt to life in Melbourne, Australia.

She makes ends meet by working as a cleaner. In her spare time, she can be seen silently holding a large white banner which reads “Stop Persecuting Falun Gong,” directly opposite the main entrance of the Chinese Consulate in Toorak. Falun Gong practitioners have become a common sight here. Occasionally, motorists toot their horns in support as they drive past.

On other days, Angel collects signatures for a petition to be sent to the Australian government, calling for an immediate end to the persecution of Falun Gong. Insofar, she has collected some 40,000 signatures by herself. Quite an effort, especially for someone who speaks but a few words of English. Sometimes she has a bilingual practitioner with her, also working on the petition, who can help her translate.

“When I’m outside collecting signatures,” says Angel, “some people ask, ‘Do you think my signing this will really help?’

“I tell them it certainly helps. Just like how the sea is comprised of countless drops of water. By signing this, you’re supporting justice. And have chosen to stand on the side of goodness.”

For years now, Angel has persisted in her efforts in raising awareness about the persecution, irrespective of the weather.

“As long as I do my part well, by allowing people to realize the terrible truth of the situation in China, people will willingly take my signature board to sign. For me … that’s hope.”

“Witnessing people’s kindness is the most beautiful thing. When I see people reading our materials and learning about the persecution, that feeling of hope arises.”

When she is at home, she makes colorful origami lotus flowers, a kind of lucky charm, which she is all too willing to give to a kind stranger who stops by to sign her petition. She has an abundance of these dainty, handmade flowers in her small windowless room. They are seen hanging from lamps, doorknobs, handles, and hooks. The three words written underneath read each flower read—“Truthfulness, Compassion, Forbearance”—the main tenets of Falun Gong.

Speaking with Angel, one gets a sense she has a wonderful optimism about her, she has great determination in what she does, and overall, is a wonderful person always thinking of others. She owes her good health and positivity to her spiritual practice.

“Falun Gong fills my heart and soul with a beautiful sensation like no other. I face everything peacefully.”

After all that she’s been through, to be able to maintain such a peaceful disposition, a reflection of her inner world no doubt, it’s obvious she’s got something in her that we can all learn from.