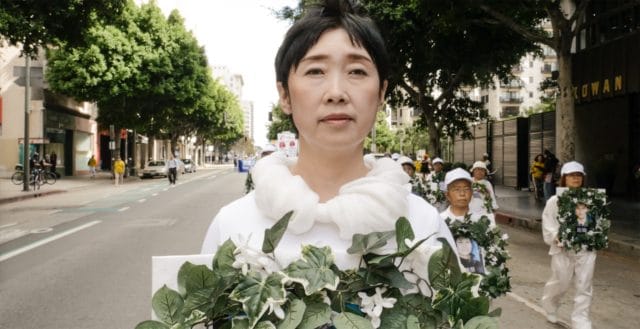 Mourning Ms. Wang Yifei holds a wreath to mourn her sister who was killed in a Chinese labor camp because she stood up for her faith in Falun Gong. Ms. Wang fled China to escape the same fate, and is shown here in a march in Los Angeles in 2016.

After witnessing police brutality against citizens as they meditated peacefully in a park, Ms. Wang decided to stand alongside Falun Gong practitioners and tried out the practice for herself. She soon became a dedicated practitioner.

In 2001, she, her brother, and her sister appealed to the authorities to end the persecution. But security forces arrested the siblings, and the nightmare for her family began. Her brother spent 12 years in prison. Her sister was tortured to death in a labor camp, and her father, overcome with grief, died soon after.

Ms. Wang escaped detention and made it to safety in the United States and to the vastly different environment of openness, diversity, and freedom in San Francisco. Eventually her brother was released from prison and escaped from China to join her. Now the siblings are dedicated to retrieving the body of their sister, which is still held by the labor camp where she was killed 18 years ago.

Ms. Wang and her surviving family members are willing to face the pain of their tragic past to tell their story and secure the release of their sister’s body as proof that she was murdered. They hope that when people learn of their personal nightmare, it will expose the CCP’s genocidal campaign against Falun Gong and help the millions of others in China suffering
the same fate.

The Wangs’ harrowing story of loyalty, resolve, and hope is featured in an upcoming documentary by Swoop Films entitled Finding Courage.

For more information on the documentary, visit FindingCourageMovie.com

The preceding personal accounts include reporting by
The Epoch Times, Minghui.org, and China Uncensored.