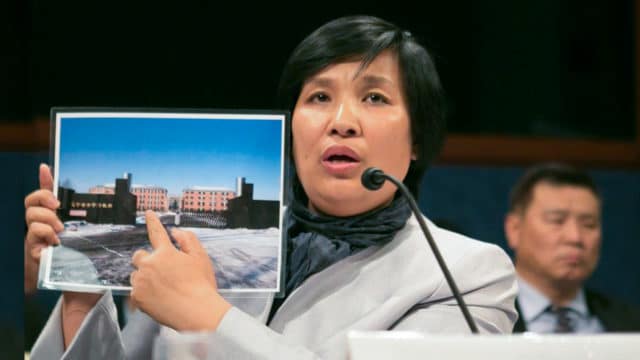 RECOUNTING THE HORRORS • Yin Liping testifies before the Congressional-Executive Commission on China, April 14 2016, on “China’s Pervasive Use of Torture.” Ms. Yin is a Falun Gong practitioner who survived torture, forced labor, and sexual violence in Masanjia and other forced labor camps in China.

After being held in various labor camps, Ms. Yin, a Falun Gong practitioner from Liaoning Province, was sent to the notorious Masanjia forced-labor camp in September 2000 because she refused to be “transformed,” a term for forcing Falun Gong adherents to give up the practice and their beliefs.

That’s where some of the worst abuse took place.

“I was cuffed to a bed and injected with unknown drugs for over two months. This caused me to temporarily lose my vision. … They injected two or three bottles each day. As a result, I developed endocrine disorders, incontinence, and had blood in my urine. In addition, their frequent violent force-feeding almost suffocated me,” Ms. Yin recounted at a hearing for the Congressional Executive Commission on China in Washington, D.C., on April 14, 2016.

Ms. Yin, who was granted refugee status in the United States in 2015, also testified that one day in April 2001, she and eight other Falun Gong practitioners were taken from Masanjia to a so-called black jail to be raped by the male inmates.

“Four or five male inmates threw me onto the bed. Some held my arms, some held my legs. One younger man sat on me and beat me. I became dizzy and passed out. When I came to, three men were lying beside me. I realized that I had been videotaped when I was sexually attacked and humiliated by these gangsters of inmates,” she said.

Ms. Yin was also detained for nine months at Liaoyang forced-labor camp, during which time her hair turned gray and her menstrual period stopped due to the grueling work, which included helping load eight tons of steel bars onto trucks in the daytime and binding artificial flowers at night until 2 a.m.

Tears ran down her face as she spoke. She said 30 practitioners she knew personally developed mental disorders from the torture, and 10 died, either in prison or after they were released.